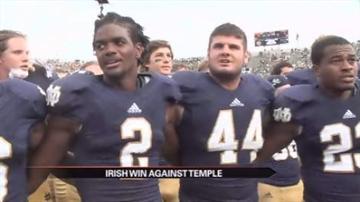 NOTRE DAME, Ind.-- The college football season is officially underway and the Fighting Irish are already off to a great start, but that doesn't mean there isn't room to improve.

"I saw some really good things and some things that we're going to have to get better at," Irish Head Coach Brian Kelly said.

From the start, the Irish came out ready to win. Running back Amir Carlisle got his first career carry--rushing the ball 45 yards down the field, but he also says there's things he needs to get better at after Saturday's game.

"I feel like I did alright. There's a couple things I feel as though I have to improve upon, a couple run reads here and there. I'm going to watch some film tomorrow and get back to work on Monday," Carlisle said.

To keep the momentum rolling, quarterback Tommy Rees passed to wide reciever DaVaris Daniels twice for 32 yards to tally two touchdowns. But, Coach Kelly says he wants to see the Irish work to put more points on the board next week when they take on Michigan in Ann Arbor.

"I want to score every time we touch the football. As I said earlier, we got up fourteen, we should have kicked a field goal, we should have been up a little bit more," Kelly said.

Coach Kelly has emphasized all week how important it is to kick off the year with a win because there are so many unknown variables that come with season openers. And the team did just that.

"Great win for our football team. Openers are probably for coaches the most difficult because the preparation and the planning. You don't know what to expect really," Kelly said.