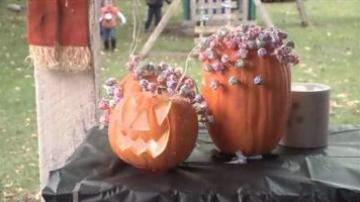 GRANGER, Ind. -- In addition to the numerous games this weekend, coaches were also fighting to raise awareness.

It took place in Granger for the seventh year.

There was a petting zoo, pony rides, magic shows, and pumpkin carving. Music was provided by The Hitman and there was a special guest appearance by the Marian High School Cheerleaders.

"We have raised almost $20,000 in the first six years and we're hoping to keep going and we can't imagine stopping," said Scott Leonard. "We just want people to come out and have fun and support the cause."

Dads even got to play Sunday Football on a 12 foot screen in the barn.