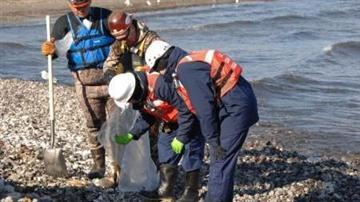 WHITING, Ind. — The Coast Guard and the Environmental Protection Agency responded to reports of an oil discharge into Lake Michigan from the BP Whiting Refinery in Whiting, Indiana Monday night.

The Coast Guard received a report Monday night of a sheen from an unknown substance discharging from an outflow adjacent to the refinery.

Peresonnel from the Coast Guard and the EPA responded and found an area of about 5,000 square feet covered in crude oil.

BP deployed about 1,000 feet of boom and used six vacuum trucks to try to contain and recover the oil.

Tuesday morning, the Coast Guard noticed tarballs less than one centimeter in diameter on the shoreline. They found an average of 20 tarballs per ten feet of shore line.

A helicopter crew did not find any sheen or pockets of oil beyond the refinery.

The Coast Guard and EPA are overseeing BP's cleanup plan and operations.

Weather conditions prevented an assessment of the progress until Sunday.

The assessment team from the Coast Guard, EPA and contractors from BP searched the southeast rocky wall of the cove near the refirenry to ensure oil pebbles were removed by cleanup crew.

The beach area was also inspected to ensure no oil had washed ashore during heavy surf. There was no visible oil.

The assessment team also conducted tests to determine if there was any submerged oil. Teams did not find any oil in or on the water.

Because the lack of oil or sheen, the crews recommended BP remove the boom except for the area near the source of the discharge.

The area will be monitored through Thursday and if no additional damage is reported, the assessment team will conduct a Determination of Clean Survey.