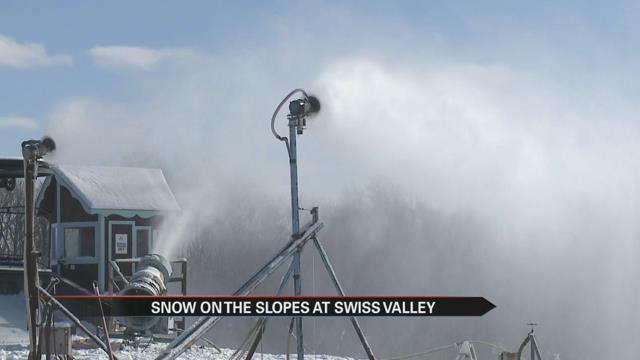 Almost half way through the ski season and Swiss Valley has not seen a single skier yet. With several inches of snow on the ground and cold temperatures in the forecast the priority is on making snow to last into the weekend.

“The whole season has been getting ready,” says employee Grant Wilson.

“This is one of the hardest winters we’ve had, because of the up and down,” says owner Jim Wiseman.

Wiseman says even with the inches of snow that fell Monday morning it still is not time to start the lifts.

“This is our opportunity first time this year that we can go just day and night so we don’t worry about opening the lifts until we can’t make up more due to the weather,” says Wiseman.

There have not been enough consecutively cold days to make enough snow. Mixing that with higher electricity costs has been an unlucky combination for Wiseman.

“We used to make on temperature right around 27 or 28 degrees but it was only six cents per kilowatt hour and now the kilowatt hour is up to 12.6 cents,” says Wiseman.

To make one inch of snow to cover the entire property costs about $4,000.

The lack of significant snowfalls this December means crews have to make about 35 inches costing Wiseman around $140,000.

“We all suffer with the ins and outs of the whole thing but we just muddle through it and keep going ya know,” says Wiseman.

“We will have most of that done and we are having schools start coming in Thursday night,” says Wiseman.

On Monday Wiseman said the crew will be making snow around the clock for the next couple of days in order to open this weekend.