Cold temps cause pipe to burst at animal care facility 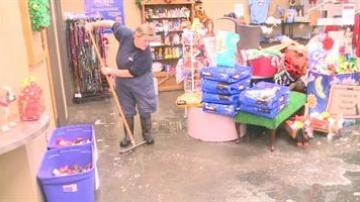 MISHAWAKA, Ind. -- Severe cold temps were the cause of a pipe burst at the area's largest animal care facility. The St. Joseph County Humane Society received word from their alarm company about their sprinkler system being activated Tuesday.

Sprinkler activation usually means a fire, but when workers arrived, they realized the pipes had burst because of the cold.

Mishawaka Fire Department came out to turn the system off, but not before gallons of water went all over the floor.

The St. Joe Cty Humane Society always has at least 4 employees on call at any given time, all of whom were called in to help clean up.

They pushed the water inside their office out the door, and into the cold.

The water quickly became ice, coating the walkway and most of the parking lot.

"We're looking for donations of salt," said St. Joseph County Humane Society worker Genny Carlson. "We're going to be cleaning up for the next couple of days, so it might be a little messy in the front office."

The building's sprinkler system will be down for the next few days, leaving it more vulnerable if a fire were to start.

Workers say that the sprinkler's water system is set up separately from the one they utilize for their animals, meaning they won't be affected by the system's loss over the next few days.

The humane society will still be open during their regular hours Tuesday, although they say you should be careful because of the ice on their parking lot.