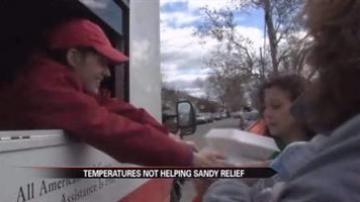 NEW YORK CITY -- Thousands of people are living in homes without heat or electricity because of super storm Sandy and temperatures are continuing to plummet.

By Monday night, temps are supposed to drop into the thirties which could be some of the lowest of the season.

New York's governor does not know what to do.

"It's starting to get cold. People are in homes that are uninhabitable. it's going to become increasingly clear that they're uninhabitable when the temperature drops" said Governor Andrew Cuomo.

Just a week after the big storm, electricity is still out to thousands across the East Coast.