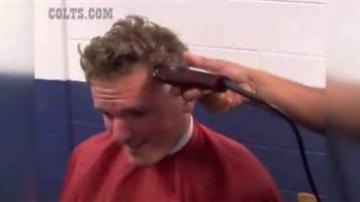 INDIANAPOLIS -- In an effort to show their support, about two dozen Indianapolis Colts players are going bald.

The NFL players, along with several staff members, shaved their heads to honor head coach Chuck Pagano's battle with leukemia.

He's been on indefinite leave since being diagnosed in September.

Sunday, Pagano gave emotional speeches before and after the Colts’ 23-20 win over the Miami Dolphins.