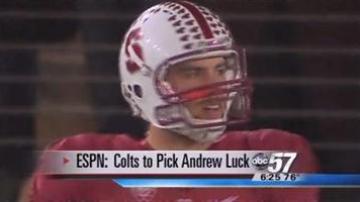 From the Cardinal to the Colts, on Thursday, ESPN is reporting Indianapolis will take former Stanford Quarterback Andrew Luck in the NFL Draft.

The Colts have the number one overall pick.

Indianapolis looks to rebuild the team, after they parted ways with Peyton Manning during the off-season.

The draft starts in just one week.