Combat Vets give homeless vets a hot meal for the holidays 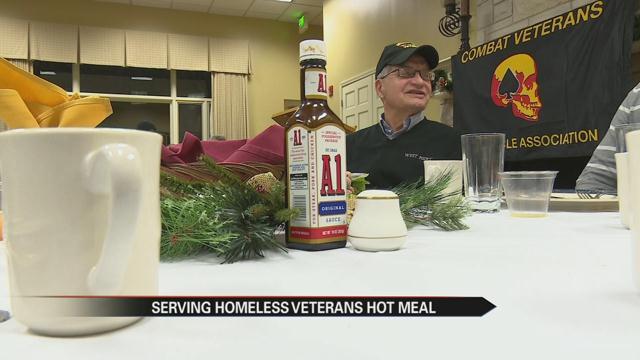 For the fifth consecutive year—Bethel College has been helping give homeless veterans a holiday to remember, and for the second time, the combat veterans motorcycle association joined in. This year, they had an extra special surprise.

“Makes veterans like us pull--take our hats off,” said one homeless veteran, Johnnell Pates.

The Robert Miller Center’s homeless veterans are tipping their hats to the Combat Veterans Motorcycle Association.

“It’s very easy to take for granted what we have until we don’t have it,” said the commander of the association, Jim Metherd.

So for the last five years, Jim has served the homeless vets a hot meal for the holidays.

“We took it up one notch this year by seeking two families who could use our help,” he said.

One of those families is Anna Murphy’s.

“It means my daughter can have a Christmas,” said Murphy.

“I just think it’s really great. I actually thought I wouldn’t get a Christmas, and I just feel really happy,” said her daughter Hazel.

“To say it’s been a bad year is an understatement…For the last 12 months, I’ve been homeless, gotten a home, been completely broke,” said Anna.

Plus—she has a knee injury from her time in the service, and she was in a serious car accident that broke her back six years ago.

“That’s what we’re all about. Vets helping vets,” said Metherd.

“It just makes a difference knowing that you’re away from wherever you are, and you got someone that’s there to motivate you and help you in any way,” said Pates.

From plates to presents, the Combat Veterans Motorcycle Association is helping their fellow vets ring in the new year with tides of good cheer.

“The year is ending on a good note. I had kind of given up hope, but it’s good,” said Murphy.