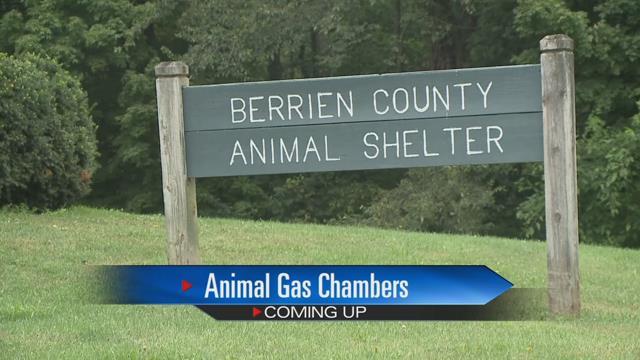 Berrien County Commissioners approved a resolution to ban the gas chamber to euthanize animals at the county's animal control.

The commissioners meeting was packed with animal advocates who expressed their gratitude after the vote came down.

Lacrosse Baginske said, “Animals sit for us and it’s time we stand for them. God did not give animals voices, so it’s time that we are the voice for them.”

Through tears streaming down her face, Baginske thanked the board of commissioners for approving the amendment.

Baginske said, “Thank you for choosing the most humane way to euthanize animals, it really means a lot to me.”

Baginske was just one of 19 people who took to the stand.

Commissioner R. McKinley Elliott said he's been working on this resolution for a while.

Commissioner Elliott said, "I've never been comfortable with it, it makes me think of some of the World War 2 movies you see on the History Channel when you see gas chambers, and just the association, it's such a negative one."

This move doesn’t mean every chamber will be eradicated though. The new amendment does not apply to private practice veterinarians.

Commissioner Elliott said employees at those places told him they still need chambers for safety reasons.

Elliott said, “One of the vets said that a raccoon grabbed his syringe when he was trying to sedate him, so there is a protocol that has to be followed for worker’s safety. There’s also a protocol to avoid any carbon monoxide being inhaled by personnel.”

According to commissioners, animal control will be given 90 days to rid of the gas chamber.

Cass County Animal Control announced on Friday they would stop using their gas chamber by January 1, 2016 or sooner.