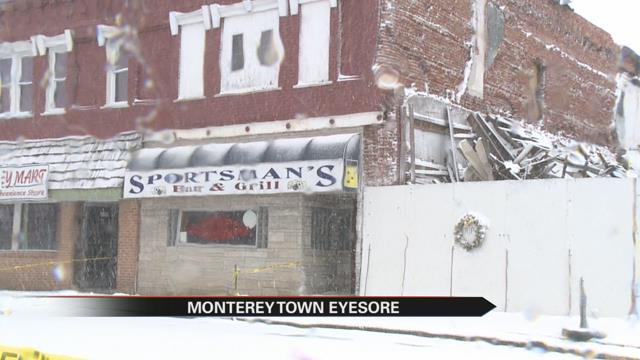 Part of an old building in the middle of one Michiana town collapsed. Fast forward a year later and nothing has been done about it.

We spoke with city officials Tuesday in the small town of Monterey about the old sports bar that’s now considered an eye sore in the community.

“It’s been standing as long as I can remember. Some of the people in the community talk about it rather affectionately so it goes back several decades,” said Monterey City Attorney, Justin Schramm.

But a large part of the Sportsman’s Bar and Grill in the small town, with just about 500 people, collapsed back in April 2015 and has been that way ever since.

“When the building fell down it was kind of a surprise to everybody. It’s an old building and it just collapsed in the middle of town one day without any warning,” said Schramm.

Schramm says because the building is privately owned, city officials can’t do much right now.

It’s an issue that concerns local business owner and Town Councilman Douglas Denton but at this point he says safety is his biggest concern and something needs to be done soon.

“Steps need to be put forth to make it secure. I’m not saying we should tear it down but it has to be resolved in some manner,” said Denton.

And in a manner that is safe and effective for the community. As Denton says, this stretch of building is the heart of downtown Monterey and residents are sick of seeing their main thoroughfare blocked off.

“Let’s get business back to normal so to speak,” says Denton.

The owner of the building has missed her last hearing so, at this point, the city’s hands are tied as they cannot legally make any decisions about the future of the building.