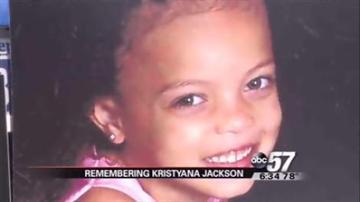 ELKHART, Ind. --  It has nearly been one year since 7-year-old Kristyana Jackson was shot and killed outside her home in Elkhart in the 700 block of Kilbourn Street.

Police have still not charged anyone in her death, but the little girl's family is not giving up hope.

On Sunday ABC 57's Judi Lykowski spoke to Kristyana's family as they are planning a memorial vigil and they want the community to know they are invited.

Kimi Jackson, Kristyana's mom said, "Last year was such an overwhelming time when we had the vigil."

After walking onto their porch at 720 Kilbourn Street after coming back from a football game someone opened fire shooting 7-year-old Kristyana Jackson in the head.

Two days later, on August 19th, she lost fight from her injuries and passed away.

"I don't think it's gotten any easier, I just think I have learned to deal with it a little better as time has gone on, but some days are just really hard," said Kimi.

Kimi's husband John was home at the time of the assault with the couple's son John Jr. who was 7-months old at the time.

"We were right here on the porch and they never entered our home, they seen my husband and they started shooting and ran off," Kimi said.

John was hit by gunfire as well.

"His shoulder was shattered, it took 4 or 5 months for that to totally heal, he still has the scars so everyday is just a constant reminder of what happened that night," said Kimi.

"We are going to probably let off balloons, just something positive for her (Kristyana)," Kimi said.

On Monday night the Jackson's are marking the anniversary of their daughter's death with a community celebration outside their home.

Kimi said, "We had so much community support we just wanted to say thanks to everybody."

For example, last November the school community at Mary Daly Elementary School planted a tree in Kristyana's memory. This year she would have been entering the third grade at Mary Daly.

"That was done in November, we actually had this one planted right after she passed. The tree in the Jackson's yard looks like the Yoshino cherry tree that was donated to the school.

"The support of the community has been overwhelming and it is still kind of overwhelming, but we just want to celebrate her in a good light, because she was very full of life, she loved everybody," said Kimi.

The family is still holding out hope that police will one day arrest the person or persons responsible for Kristyana's death.

Meanwhile, their focus right now is celebrating her life with this community memorial that kicks off Monday night at 7pm.