Community works together to save vandalized haunted trail 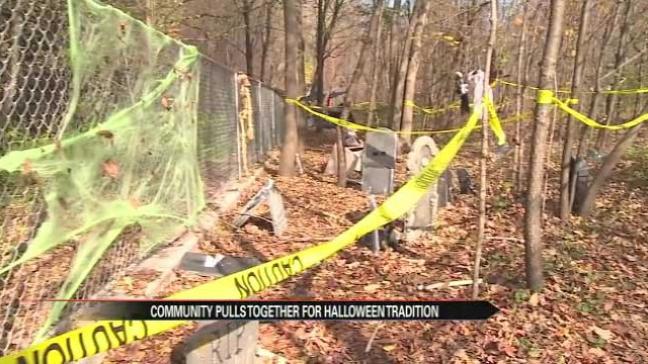 Vandals nearly wiped out a Halloween tradition in La Porte. Every year, the YMCA puts on a haunted trail for families and kids. This year, vandals cut through a fence and destroyed the haunted trail.

“It is an event for kids and families and so why somebody would somebody would make the decision to come and destroy that, I don't understand that thought process,” said La Porte Mayor Blain Milo.

Cindy Berchem, Executive Director of the La Porte County YMCA says it takes a lot of manpower and volunteer hours to pull the trail off.
Volunteers were almost finished on Wednesday, when people cut through a fence and vandalized the props in broad daylight.

“The vandals broke the props and started destroying the site,” said Berchem.

If the vandals had their way - for the first time in ten years—there would not have been a haunted trail in La Porte.

“We made the decision that we were going to have to cancel it because we didn't have people to stay out overnight and watch things for the remainder of the week,” explained Berchem.

Berchem says that is when YMCA employees and Mayor Milo took to Facebook – calling for volunteers to help rebuild the trail.

“Mayor Milo went to her Facebook page, I went to the YMCA's and we started getting our friends to share it. As of Friday morning Mayor Milo's post has reached over 32,000 people and we are approaching close to 18,000 with our views as well," said Berchem.

About 80 volunteers pitched in to reconstruct the haunted trail, including the mayor. Because the community came together, La Porte's Halloween tradition lives on.