Commuter train smashes into truck and cuts it in two 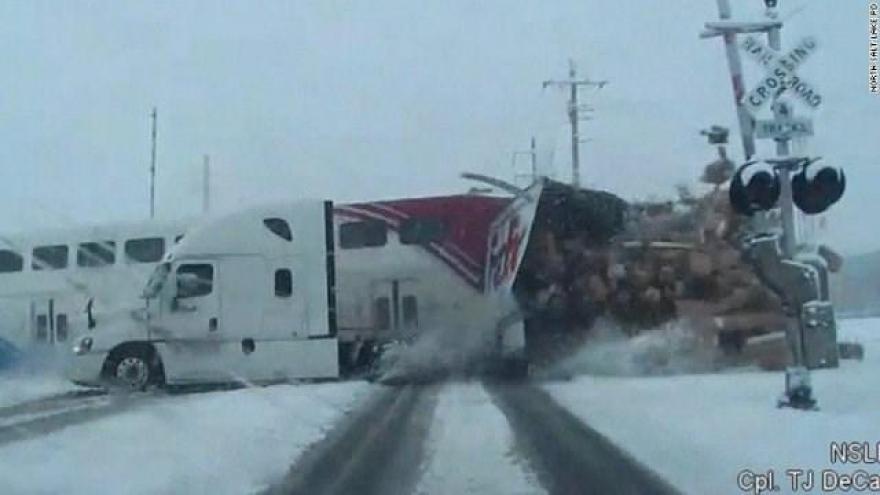 (CNN) -- The impact is so dramatic that it's fortunate no one was hurt.

A speeding commuter train slammed into a FedEx semi-trailer, slicing it in two, at a rail crossing in North Salt Lake, Utah.

The crash, caught on a dashcam, shows the Utah Transit Authority FrontRunner train cutting the first trailer behind the semi in half.

It happened Saturday during a snow storm.

Medics assessed the driver and the 82 passengers on the train. Everyone was OK.

In a statement to CNN affiliate WJW, the transit authority said the crossing gates weren't working properly because of the weather conditions. Nor were the flashing lights and bells that warn of an approaching train. Onlookers said the crossing arms didn't come down until after the train was coming through.

"In the event of a power outage or lack of signal, crossing gates are programmed to default to the 'down and active'position as a safety precaution." the statement said. "Preliminary information indicates the gates were affected by the severe ice and snow conditions at the time and were in the default 'down and active' position, as they are programmed."

"The agency has never had an accident like this before, and UTA is investigating why and how it happened to ensure it doesn't occur again," the agency said.

A spokeswoman for FedEx told CNN: "We are aware of the incident in Salt Lake City and are grateful that no one was seriously injured. We worked with authorities during their investigation to quickly clean up the scene and minimize the impact on customers."