Company, city disagree on who's holding up bridge repairs 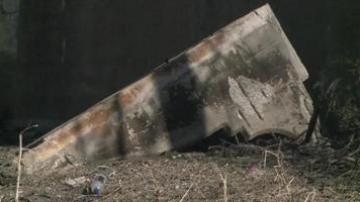 SOUTH BEND, Ind. -- A chunk of concrete fell from the Grand Trunk Western Bridge in South Bend. The Canadian National Railroad, who owns the bridge, says they're waiting on a permit from the city to begin repairs. The city says the railroad doesn't need a permit.

The bridge is over 100 years old. A nearby resident noticed that a huge chunk of concrete fell from the bridge.

Residents are worried that more pieces of the bridge will fall off and hurt someone.

"I've been living over in this area since October, but it's probably been down longer than that," said nearby resident Nathaniel Walker.

Canadian National says it filed a permit to make repairs on the bridge, but the city of South Bend says it never received one.

"My apologies if we said the word permit. That's not the right word. It's, it's it's," said Patrick Waldron of Canadian National Railroad.

Waldron said they are not allowed to use heavy equipment without some level of coordination from the public works department.

"It's as simple as that," said Waldron.

We asked if getting permission was the holdup.

But the city of South Bend says the company does not need a permit.

As far as the city is concerned, work on the bridge can start at any time.

Canadian National says they first noticed the chunk that fell in January, but didn't want to start work until the weather cleared.

They're hoping to start repairs as early as next Monday.