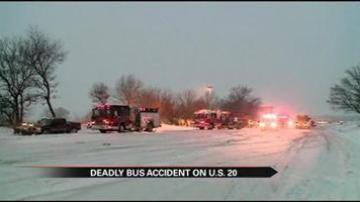 LAPORTE, Ind. -- The company whose motorcoach was involved in a fatal accident on New Year's Day released a statement about the incident.

A Royal Excursion motorcoach was struck by a truck while on US20 near 450 East in LaPorte County.

The motorcoach was returning from the Four Winds Casino in New Buffalo Michigan, according to the company.

There were 50 people on board at the time of the accident, the company said.

The driver of the pickup truck died and 15 people were injured in the accident.

Royal Excursion offers our deepest condolences of the family and friends of the driver of the pick-up truck and we pray for comfort and strength during this sorrowful and difficult time. We extend compassion to the passengers who suffered injuries and to all passengers on-board. We are working to make sure that those who were injured received immediate medical attention and we provided alternate travel home to those who needed it.

The company is based in Mishawaka.