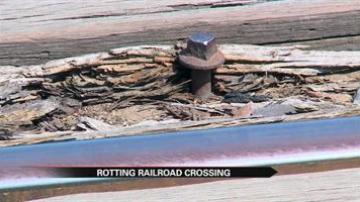 SOUTH BEND, Ind. -- Residents in the River Park neighborhood say the railroad crossing at 30th Street is so bad it has damaged cars. They're worried someone is going to get hurt.

At the crossing, on 30th Street between Hastings and Jefferson, the wood is rotting away. One hole is 8-feet wide and 3-inches deep.

Residents say if someone's tire goes flat, there's no way a tow truck could get there before the next train comes.

"This wood is rotting and the holes and the spikes, look you can see how they're up from the ground and there's no ties," said Phyllis Frushour.

Chris Glassburn went to the tracks Thursday with an orange safety vest, a measuring tape and a camera.

"It's actually gotten to the point where people are crossing on the edges on the sides--instead of driving down the middle," said Glassburn.

"About one mile an hour," said Joe Cradolph.

"I usually slow all the way down to maybe like 2 and then I just kind of roll," said Shayla Hampton.

Hampton says she usually hugs the outside of the crossing because the middle has giant metal spikes sticking up.

"Every day when I go over them they suck. You have to slow down. Your tires go in between the spaces. and people who don't know about the tracks-- when they speed over them-- like one of my friends-- her muffler fell off," said Hampton.

Cradolph says it's even worse on a scooter.

"Well they need to be fixed because when I ride my bike over here I mess it all up under here from these tracks," said Cradolph.

The upkeep of the crossing is the railroad company's responsibility.

We contacted the Canadian National Railroad Company, they said they plan to fix the crossing by late fall.

If you have a crossing that has rotted wood and metal spikes exposed you should call the railroad company's customer service line since it is their responsibility and not the city or county.