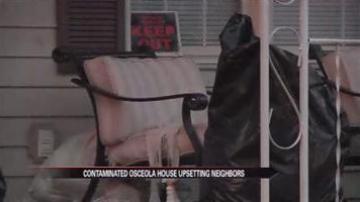 ST. JOSEPH COUNTY, Ind. -- Residents in one Osceola neighborhood are concerned about a home on their street that has been condemned.

The St. Joseph County Health Department deemed it unfit to live in after police found a meth lab inside just weeks ago.

Now, neighbors are concerned for everyone's safety. They worry that even if it is cleaned up professionally it will not be safe for another family to move in, which is why they want to see this house torn down.

"It is unsafe. It is extremely unsafe," said Helen Collins who has lived in the neighborhood nearly 50 years.

Neighbors living along Toledo Avenue said this has always be a quiet, safe neighborhood until recently.

"I don't like it at all. I raised four children here. I have 11 grandchildren and there are children up and down here all the time," said Maurine Stevens.

Last month, St. Joseph County police were called to the Osceola home after the homeowner said her son rented out the house without her permission.

That is when police stumbled upon a meth lab inside the home. It did not surprise neighbors, though. They say they have seen drug activity around the home for some time.

"We have called and reported it several different times, we called police so much they stop showing up," said Stevens.

The home has been empty for weeks and now it has a sign posted on its door. It is warning from state police saying the home is still a safety hazard even though the meth-making chemicals have been removed.

It is so hazardous, in fact, that the St. Joseph County Health Department has now condemned the home. According to regulations, the homeowner is supposed to pay to get it cleaned.

Yet, neighbors said she has been trying to do it herself. "She had one of those white outfits on and I asked her what she was doing and she said they weren't going to pay to clean it," said Collins.

Now, all the neighbors see is trash piled up in the yard. Not only is it an eyesore in the neighborhood, but it has neighbors worried about how safe the house really is if it has not been cleaned up properly.

That's why those living in the neighborhood want the house torn down.

"As far as I am concerned, that is the only safe way to get rid of it," said Stevens.