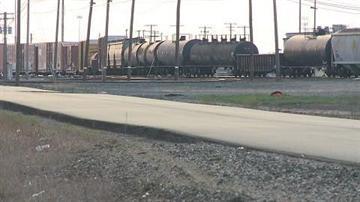 Everything Charles “Chazz” Talyor would need at the scene of a hazardous material spill is within reach, inside the hazmat team’s truck or the trailer it tows.

But all of the equipment and gear doesn’t begin to help him as much as knowing what kinds of hazardous materials his team will likely encounter at any given time.

To get that information, the team commissions a study to track what hazardous materials are being moved through the area.

The last study was completed as recently as the spring of 2011.

All nine categories of hazardous materials were spotted being transported through northern Indiana by vehicle or train, at that time.

Over the course of the study, which lasted 400 hours, more than 7,000 train cars carrying molten sulfur were counted, making it the most common flammable solid on the rails in Elkhart County.

If a train were to derail inside the city limits the clean up could be a daunting task, according to Taylor.

Talyor pointed out the variety of questions that would need to be addressed for one single element of the response. “If it’s during school and you have schools in the downwind path of a vapor cloud of [molten sulfur] or one of the other products, do we shelter in place? Do we evacuate the people? Do we move them to different parts of the city?”

Some of the chaos can be cut down on simply by knowing the likelihood of what spills may occur and having easy access to the right equipment and materials to deal with the most common threats, according to Taylor.

He feels that is currently the case in Elkhart, and is confident that should a derailment occur within the city, his team would be able to handle it effectively given the tools and manpower they have.

The hazmat team is fully staffed with 30 technicians, 10 per shift, operating currently.