Congress to debate about possible war against ISIS 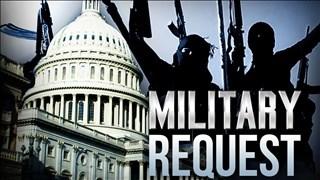 Congress is getting ready to debate on whether or not to authorize military force against ISIS.

On Wednesday, President Obama sent Congress a draft resolution, to use military force to combat the Islamic terrorist group.

“The resolution strikes the necessary balance by giving us the flexibility we need for unseen circumstances,” says the president.

This plan would authorize a three-year military assault on ISIS including limited ground combat operations, however, the president is ruling out another long-term American ground war.

This plan seems to be a tough sell in both the parties.

Some Democrats say the plan is too open-ended and could lead to a major escalation in the fight against ISIS.

The Republicans are controlling the debate, and some believe it's too limited and does not give the president enough authority.

“ISIL has proven dangerously competent like no other group before it at employing such tools in furtherance of its nefarious strategy,” says Michael Steinbach of the FBI.

Authorities believe there are hundreds of radicals inspired online who could launch an attack in the United States on short notice.