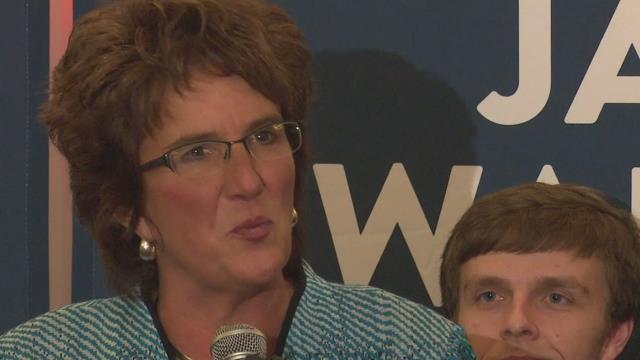 She voted Tuesday morning around 7 a.m. at Jimtown High School in Elkhart.

She waited nearly 45 minutes in line, but took advantage of the opportunity to talk to voters.

"This is exactly what freedom is," Congresswoman Walorski said after voting. "This is what we fight for, this is why I’m running you know to be able to fight for freedom and I’ve never seen anything more gratifying than this it’s an awesome thing and I’ll never forget it."

Walorski was up against Democrat Lynn Coleman. Around 8 p.m. Coleman conceded defeat.

“It is so important to be jubilant tonight because we are leaving this little stage tonight with all kinds of momentum to go back to Washington to take Hoosier solutions right from this district as we have been for the last couple of years. And I am just absolutely grateful, grateful to the Lord for the prayers he has answered," Walorski said after winning.

At her watch party in downtown South Bend, Walorski thanked her supports and her campaign for their hard work.

"We were successful tonight because the grassroots in this district. This is exactly what we want and I am grateful for that," Walorski said.

She won 59% of the vote in 9 of the 10 counties in Indiana's 2nd District. This will be her third term in Congress.