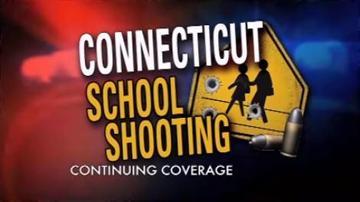 NEWTOWN, Conn. -- It's been just two days since the second largest mass school shooting in US history. Twenty kids and six adults were brutally murdered by a gunman.

Sunday, mourners flooded into St Rose of Lima Church, still reeling. Flowers, teddy bears, and candles are now piling up at a fast pace as all of Newtown turns into one large memorial.

But that somber tone turned briefly to alarm when police and SWAT teams broke up prayers with guns drawn to evacuate one thousand people from a noon mass.

"There was a threat, and someone had threatened to disrupt  the service, the mass, so in that interest we acted swiftly," said Brian Wallace, Director of Communications for the Diocese of Bridgeport.

Security was tight with President Obama in Newtown for an evening prayer vigil. He met with families of the victims of the shooting.

Investigators are still trying to find out what prompted 20-year old Adam Lanza to shoot his own mother multiple times in the face before continuing his killing spree at Sandy Hook Elementary.

It only ended when he shot himself in the head.

Now the town's focus is to help the youngest survivors not have their lives defined by tragedy.

A nearby town is helping by offering up a school that is sitting empty to the children of Sandy Hook. The idea, whenever they do go back to school, they don't have to do it in a building struck by tragedy.

The tragedy may have happened in Connecticut, but the pain and grieving is being felt right here in Michiana as well. The tragedy that unfolded was one of the topics at Christ the King Church Sunday afternoon. It is a subject that has been on everyone's minds, so many felt it was an appropriate topic to address at church.

As more information and images of the victims are relseased, folks continue to be shocked by this horrific event.

Joan Kreskai, a Librarian at Corpus Christi School has been troubled by events in Connecticut.

"My first thought was Oh dear God they were only up to 4th grade in that school. How can this happen?" said Kreskai. "It just bothered me because I don't know how we are going to stop this. You know you can go to all these measures but if somebody unfortunately wants to do this they are going to find a way and that's what is so disturbing. It seems like these tragedies draw more people to church, as I remember after 911 the church was standing room only."

Monday morning, area kids will be heading back to school for the first time since this tragedy. Michiana parents and parents all over the nation grieving for the families that lost their kids are also worrying about the safety of their own kids.

South Bend father Leon Scott and his kids are both concerned about the safety of their school. Scott says he has been answering a lot of questions in the past two days from his kids, 11-year-old Dante Scott and 8-year-old Karina Scott.

"I am not real sure how to talk about it because kids are impressionable. I do not want my kids to live in fear of going to school," said Leon.

He has always thought his daughter was safe at Kennedy Primary, but now he would like to see some extra safety precautions to ease his mind, such as metal detectors.

Karina and other kids at the Martin Luther King Center say they are praying for the families who lost their children younger than little Karina Scott.

"We are praying for you every night and we are sorry that you lost your kids right before Christmas," said Karina.

A big issue surrounding every community is how to react to this tragedy, especially if you have someone with a mental health issue in your family. ABC 57 talked with a mental health expert about how to handle this situation and he says the best thing people can do is talk about it. Many of these horrible situations occur because warning signs are not noticed.

"People need to realize it's not a bad thing to talk about," said Charlotte Fletcher, President of Elkhart NAMI. "We need to talk about it so people can get diagnosed earlier. And people who have family members aren't afraid to go get help."

There are several groups in Michiana that can help you with your or someone you knows mental disease. Most of them suggest contacting your physician first to get help.

Across the nation there is a movement for everyone to wear green and white Monday, Dec. 17.  Those are Sandy Hook's School colors. This is to remember those lost and support those who were left behind to pick up the pieces.