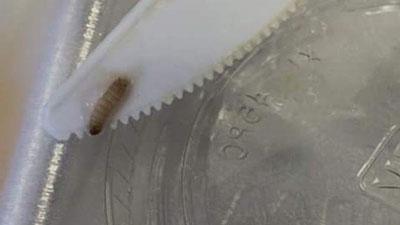 WALLINGFORD, CT (CNN/WFSB) -- It was a disturbing lunchtime discovery for a student in Wallingford, Connecticut.

School officials said they've launched a full investigation at Sheehan High School, where a worm was found inside a processed cup of fruit.

Kimberly Davidson said her daughter first made the discovery in January during her lunch period. She said she notified the director of food services but the problem popped up again last week.

The fruit had been spooned into the cup from an industrial-sized container.

Superintendent Dr. Salvatore Menzo said a report from the state entomologist lab confirmed the bug had been cooked during the packaging processing. The packages arrive at the school in large containers from the food distributor Sysco Systems.

"The larva shows morphology consistent with having been cooked," said Dr. Gale Ridge, entomologist with the Connecticut Agricultural Experiment Station.

"I can assure you we will fully investigate the incident with our factory and will expect a full accounting from the Quality Control Officer there," Durno wrote. "Organic matter of this type can appear from time to time in the processing of fresh fruit into canned fruit."

The school district claimed the discovery was an isolated incident.

However, Davidson suggested otherwise. She said it was the third time in as many months.

"Wednesday, I'm in the Guidance Office and I hear some kids talking, showing pictures how they discovered a worm in their fruit cup. This was this week and there were like three other kids," Davidson said.

She said this wasn't an isolated incident and that her daughter's friend had a loaf of moldy bread for lunch last Friday.

The food services manager said this hasn't happened in her 30 years and now the distributor and school system said they are checking their quality control process to make sure this doesn't happen again.