Construction of The Freedom Tower reaches a milestone 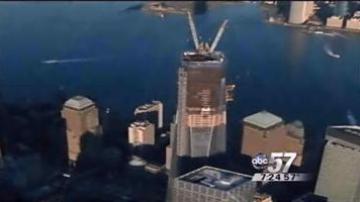 The building, known as The Freedom Tower, surpassed The Empire State Building in height.

It is the tallest building in New York City.

Three crane operators working on the project were working in Brooklyn on September 11, and saw the towers fall.

Ivor Hall, one of the crane operators said,It's a lifetime opportunity to do this especially  you know all the people that died here you know .. scarified their lives here.This building its, uh it's so emotional for me.  You can't even imagine how I feel. I feel proud."

Hall immigrated to the U.S. almost 30 years ago and said working on the tower is his gift to the U.S.