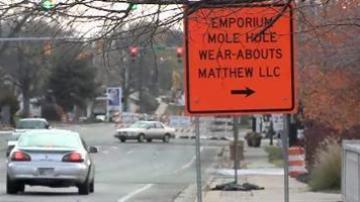 SOUTH BEND, Ind. -- The area around Niles Avenue and Jefferson Boulevard has been under construction for months and it’s having a big impact on local businesses.

For the last three months, portions of Niles Avenue have been shut down and now the Jefferson Boulevard bridge is closed. That has some businesses losing customers and others moving out.

The East Bank Emporium has sat on the corner of Jefferson and Niles for more than 30 years.

"Anybody who wants to go downtown is going to come here or a couple of other restaurants in the area,” said Shawn Dickens, General Manager of the East Bank Emporium.

But getting there can be difficult.

Business was already suffering because of construction on Niles Avenue, but Dickens said the closure of the Jefferson Boulevard bridge has made things worse.

The construction is not a total deterrent for customers.

"This wouldn't keep me away, I would find a way to get here,” said Doris Peach.

Peach came from Nappanee to eat lunch with a friend, but said if she didn't have plans to eat here, the construction may have changed her mind.

"I might think, 'Oh, you know, we'll go somewhere else.’ Yeah, that might come into play,” said Peach.

Colleen Van Fleit, the owner of Studio C, a hair salon in another part of the building, has not seen a drop in clients, but said her clients are frustrated with the confusion outside.

"I did have one client call for an appointment and she wanted to know if the construction was still bad, and I said, ‘Yes, it's still hard to get to.’ So she is waiting. She is waiting a couple more weeks before she is going to come down here and fight with it,” said Van Fleit.

Van Fleit said that's the exception not the rule. Many of her clients are parking blocks away and walking to the building.

Hopefully that will only be for a little while longer, construction is expected to wrap up late this month.

"The way to look at it is, this is going to improve the neighborhood and in the end it's going to be good for business,” said Dickens.

Not everyone things the changes in the area will lead to better business. The owner of The Mole Hole said business is down 80 percent. He has already moved his clothing boutique out of the building and into a plaza in Mishawaka.