Coolspring firefighters worked hard to free trapped drivers on I-94 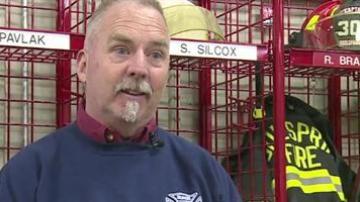 LAPORTE, Ind. -- First responders say the I-94 pileup Thursday night was the worst accident they have ever seen. They raced to the scene and spent the afternoon and all night outside in the bitter cold pulling as many people from the wreckage as they could.

Firefighters at Coolspring Township Fire Department train for massive accidents but they say in all of their years of practice-they've never seen one quite like that.

"I was just figuring we'd go to a couple car pileup and no injuries but it was the complete opposite of that," said Drew Blue of the Coolspring Township Fire Department.

Firefighters from the Coolspring Township Fire Department got the call around 2:30 Thursday that there was a multiple car accident on I-94 near mile marker 36.

"When I pulled up my eyes got real big and I called for mutual aid right away," said Blue.

"We've never been, I'm lost for a word, but we've never come upon a scene like that. It was traumatic," said Fire Chief Mick Pawlick of the Coolspring Township Fire Department.

They said the scene was mass chaos. All they could do was climb into the mess.

"You just start out where you arrive, find out where's the first person you can help and you just start checking vehicle after vehicle looking for anything you can do to help," said Rick Bradford of the Coolspring Township Fire Department.

"There's just as many if not more, cars out there. You don't see the cars. The cars are literally crumpled into each other and underneath these semis," said Pawlick.

Their goal was to get as many people out of the wreckage as fast as possible. They feared with every second that passed, that another life could be lost.

"We used everything we had - we had chains, come-alongs, I was using a sawzall trying to extricate Jeff from his vehicle, we had the jaws of life," said Bradford. "We had to remove the tops of several doors to get the patients out."

Although they practice and train all their careers for a wreck like this-they hope they never have to respond to one again.

"Hopefully we don't get a call like that again soon," said Bradford.