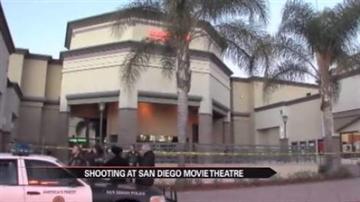 SAN DIEGO -- It was another movie theater shooting, but this time it was the police doing the shooting during a showing of Les Miserables.

The incident happened down the street from the theater when a man with a history of violence attempted to abduct his girlfriend at gunpoint.

She escaped and called the police, then the hunt began.

The gunman snuck into the theater and when the projector went out, the police stormed the theater.

Police shot and wounded the suspect.