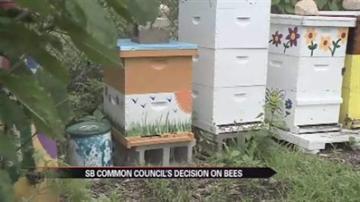 SOUTH BEND, Ind. -- The South Bend Common Council voted 7-1 in favor of a new bee ordinance. It requires homeowners to follow a few restrictions before they can start a hive on their property.

Bees are a lot more than a summer buzz, they pollinate a third of the world's food. And the number of bees calling Indiana home is slowly declining.

"Indiana is one of 35 states that is identified as suffering from colony collapse disorder," says Sara Stewart, Unity Gardens Executive Director. "Colony Collapse Disorder is when there are sudden disappearance or death of bees and so this is becoming a global food issue."

Vince Barletto, a local beekeeper, took it upon himself to propose a change.

A new bill will allow people living on less than five acres to put hives in their own backyards. Not only making honey for their homes, but helping pollinate the entire region.

"What we are trying to do is enable and empower even the most impoverished residents to be able to be sustainable to grow their own food and to learn about their own environment that's around us," says Barletto.

He says the current bee legislation is 60 years old, and does not meet the challenges today's environment is facing.

"We want to make this population stronger," says Barletto. "Statistically we are going to have a more sustainable and a healthy colony of bees in the city because they are properly managed or properly maintained as opposed to a hive in your backyard in a tree. Nobody wants a hive in a crawl space of a house. We would rather maintain those in an efficient and safe method."

The one vote against the bee bill was from a councilman that was worried that it might not be the best thing to have more bees given the number of allergies these days. He thinks more backyard bees will bring more honey, but also more bee stings.