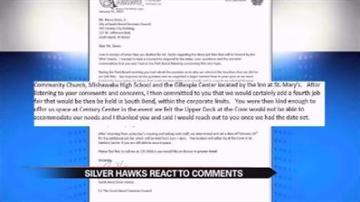 He gave a statement that said,

"It's mystifying why not one of the job fairs is being held in South Bend. If indeed the best of Michiana are being sought to work at the Cove. Why would South Bend be snubbed when we have an extremely talented work force?"

We called the president of the Silver Hawks, Joe Hart, to get his reaction.

He said he was taken aback and forwarded us a letter he sent to Davis.

The letter stated the Silver Hawks organization chose those places because they can accommodate large crowds. Hart went on to say the Silver Hawks have been planning a fourth job fair within city limits.

The tentative date is Feb. 19 at either the Cove or the Century Center.