Councilman wants city offices to move into Hall of Fame 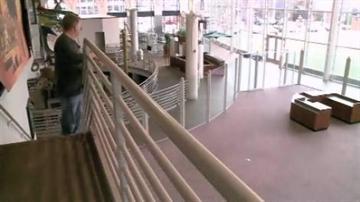 SOUTH BEND, Ind. -- The College Football Hall of Fame moved out of South Bend at the beginning of the year and the building remains empty. The city’s Common Council president says city offices should move there.

The city currently leases office space in the county-city building for city offices.

Common Council President Derek Deiter held a press conference Wednesday to discuss his suggestion that the city offices move into the Hall of Fame building. He says it would save the city money and would put a tenant in the vacant building.

The former College Football Hall of Fame is empty now, but the plan for a new tenant is taking shape.

“All we want is the mayor's office and the community investment department to look into possibly moving the city offices here,” said Derek Deiter, South Bend Common Council President.

According to Deiter's calculations, moving city government into the multi-million dollar money pit could save the city money.

"Just on the rent and stuff that we are paying it's basically half a million dollars,” said Deiter.

But the money is only one of the benefits, according to Deiter.

As soon as you walk in the doors you could access city offices.

"You are only walking 40 feet instead of standing around, coming through, going to an elevator, waiting; it's all right here,” said Deiter.

Upstairs Deiter says there is plenty of room for the mayor's office, community development and the city attorney's office.

The lower level could hold other city departments and the council chambers could be set up.

"I think once people see how, once all of the exhibits are out, how much room is down there it's pretty staggering,” said Deiter.

At just under 59,000 interior square feet, the Hall of Fame dwarfs the 28,000 square feet the city rents from the county.

In five years, the city would only pay for utilities in the building estimated at just under a quarter of what their currently paying in rent.

"This is a fantastic place to have city government. You are in the downtown area, you are right here,” said Deiter.

We have no plans to move City offices at this time. I am always open to exploring ways to improve City efficiency and reduce costs, and this is the kind of topic that should be part of an ongoing, shared discussion among the administration, Common Council, and County leaders.