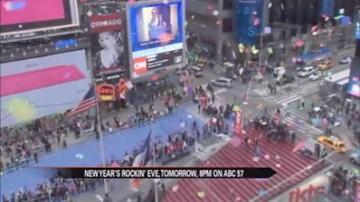 This celebration will be the first without the legendary Dick Clark. While he will be missed, Seacrest said he is definitely not forgotten.

"I think it will be reflective, it will be celebratory in so many ways because he created this tradition on television and he brought us up as kids watching it and we've put together a really special night," said Seacrest.

You can join Ryan, Jenny, and an impressive line-up of musical artists as they ring in the new year from New York City.