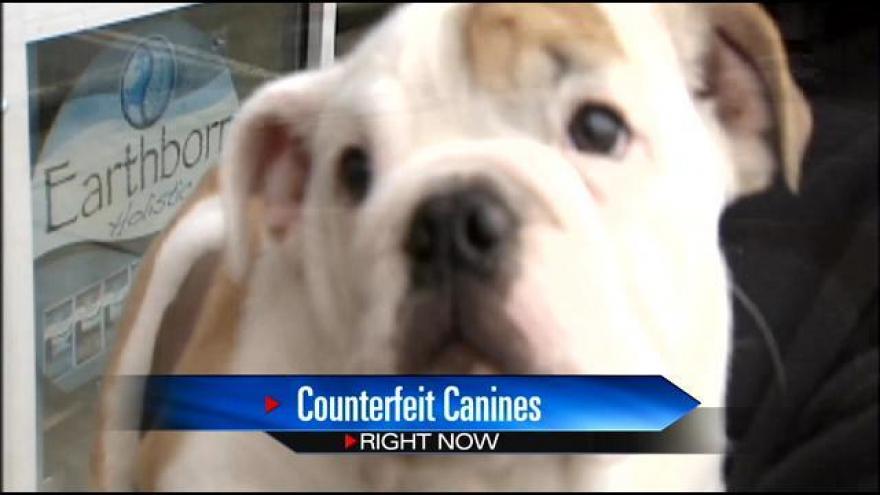 Scammers are using pictures of cute puppies to get money out of unsuspecting animal lovers. The hopeful owner reaches out to the breeder, sends them cash, then they don't get their new puppy.

This case started 700 miles away in North Carolina but an unsuspecting Elkhart family was brought into the scheme.

“I went on a website called dailybulldogpuppies.us and it looked legitimate,” says Stephanie Santos a North Carolina resident.

Santos paid a $300 deposit for a puppy, but it never showed up.

“They could not find a reservation for me of any puppy that was supposed to be delivered that day,” says Santos.

When asked if Santos had any idea where the scammers were located, she replied “Indiana.”

ABC57's sister station, WSOC in Charlotte, North Carolina, contacted us after receiving a text from the supposed English Bull Dog breeder. The message indicated to meet at a house in Elkhart, Indiana to exchange money for puppies.

The family who lives at that home was confused and said, “We don't even own a dog.”

The owner of the home came out to clear her name. She said in Spanish, “There is something really strange going on because I don't have a dog or anything. I dedicate my time to working not conning people.”


Now there are two victims of the scam. Santos and the family living at the Elkhart address that is being used in the scam.

"I would be concerned because obviously somebody used your address for something that is criminal,” says Chris Snyder of the Elkhart Police Department.

Snyder explains that scammers pick things like addresses at random.

“Why they pick a certain address it's hard to say. Maybe it's something that is close and they can watch to see. But if you have done nothing wrong then let us help you. You aren't going to face any trouble for that as long as you're not involved in the criminal part,” assures Snyder.

Heidi Dutoi of South Bend has been breeding Boxers for four years. She says there are a few simple steps to avoid falling victim to a puppy scam.

“A legitimate breeder when you are going into purchasing a puppy they should have a contract. Go do a site visit; you might want to ask for reference of people who have maybe bought puppies from them,” says Dutoi.

Dutoi says some key points to look out for include a record of vaccinations the puppy has received and a clause stating that if the buyer can't take care of the dog they are to return it to the breeder.

And even though online shopping is quick and convenient, Dutoi says it may be best to buy puppies the old fashioned way.

“Now the internet as far as like researching breeders that's fine. But as far as like advertising in Craigslist and in the newspaper most cases a really good breeder does not have to advertise,” says Dutoi.
Share this article: