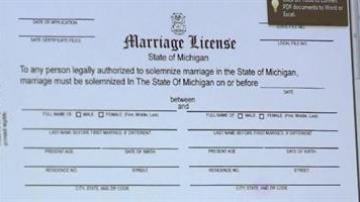 BERRIEN COUNTY, Mich. -- Because of a stay on the court ruling overturning Michigan's Marriage Amendment, same sex couples still can't get married in Michigan. Local clerks say if the courts decide gay marriage is legal in Michigan, they don't have the appropriate marriage license forms.

An appeal to that decision put same-sex marriages on hold until at least Wednesday.

"It's the unknown and you're waiting on word from the state of Michigan," said Sharon Tyler, Berrien County Clerk.

Tyler doesn't make the laws, she just follows them.

She says those wanting to get married will have a hard time doing so if the ban on gay marriage is lifted.

"We had not any clarity from the state of Michigan or any direct direction on how to proceed since they have not given us the forms," said Tyler.

"I would hate to see somebody after waiting ten or twelve years to get married and then they come into my office and I allow the license to go through and issue it and find out that they're not married," said Tyler.

"There are processes that are bigger than us," said Mary Jo Schnell, Interim Executive Director of OutCenter.

Schnell understands the legal roundabouts, but as the leader of a local LGBT support group she feels the county could've done a better job preparing the forms.

Four counties in Michigan had special Saturday hours to accommodate the new law.

"This has been going on for a little bit of time now and so typically, you queue up especially for this type of historic opportunity," said Schnell.

On Wednesday, an appeals court will make a decision on whether to continue the ban or once again make gay marriage legal in the state of Michigan.

The clerk says she'll do whatever the law mandates, but right now that stay prevents her office from creating any new forms or issuing licenses.

If she doesn't follow that order, she opens up the county to lawsuits.