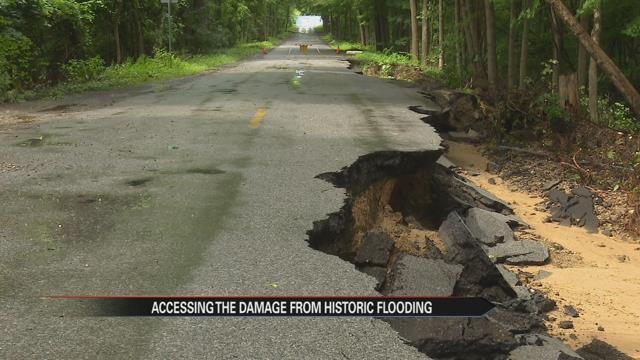 Days after record rainfall and far-reaching flooding—St. Joseph County is working with South Bend to put the pieces back together.

Water has receded from areas like Chippewa Avenue and Fox Street, but these areas are in desperate need of repair—and residents who live nearby agree. County and city officials say they’re in recovery mode, and it could take days, even weeks to start reconstruction.

Residents are afraid more accidents like this could happen if the roads remain unrepaired for too much longer.

“I wanted to know how close are we to danger from living here,” said Lois Clark, who lives right next to the sinkhole on Fox Street.

Mayor Pete Buttigieg says before the county and city can repair any roadways, they have to wait for the water to recede.

“It’s going to take days for that water to move through the different places that it’s going. IT’s going through waterways, ditches, creeks, obviously the storm water and waste water system, and of course in some places it’s working it’s way through people’s basements,” said South Bend Mayor Pete Buttigieg.

One man who lives down the street from where Chippewa Avenue collapsed says it’s about time the city reconstructed the  road. He just wants them to do it properly.

“It’s been neglected for so many years, and it looks like they’re going to work on it now, and they most definitely have to now. As you can see—it’s gone,” said Joe Schultz.

Chippewa Avenue is one of three roads that are still closed off. The other two: Fox and Walter streets.

Mayor Buttigieg says the focus now is making sure the city is safe.

“Public works teams are out inspecting roads, looking at what’s undermined. It’s important to stress that billions of gallons of water are working their way through the system. That means some of the damage that’s happening to roads may not have even occurred yet,” said Buttigieg.

The St. Joseph County Emergency Management Agency, which is assessing damages, echoed Mayor Buttigieg. The director also said they are working closely with the Indiana Department of Homeland Security to determine damages and reparations.

“I will tell you that is not a fast process. The collection process is one dependent on being able to access the sites, and when sites are under water, it is not easy to get to them to fully assess the impact,” said David Kane, the director for the Indiana Department of Homeland Security.


City and county officials ask the public to use one number in reporting damages: 574-235-9378. That’s for the St. Joseph County Emergency Management Agency.

South Bend officials also put out a notice Thursday stressing that people need to get building permits for any repair or reconstruction activities before starting them.