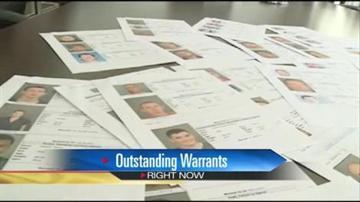 ST. JOSEPH COUNTY, Ind. -- How many people who are out walking the streets in St. Joseph County should be behind bars? Statistics show the county has an unusually high number of people who have skipped out on their bail bond and failed to appear in court.

Get arrested for a crime in Saint Joseph County, Indiana and all you need is ten percent of your bail bond - in cash - to walk right back out of jail.

The county cuts you a break if you pay cash and returns that money if you show up for your court date and are found innocent.

One other option is to ask a bail bondsman for help.

The bonds person would post bond for you, but even if you are innocent, you would never see that money again.

"It seemed to be that there really was no advantage with one over the other for people appearing to their court hearing: whether they posted a bond for which they got none of the premium back or they posted a cash option with the court," said St. Joseph County Prosecutor Michael Dvorak.

But there are almost no bail bondsmen in St Joseph County.

They say it's because they can't beat that cash deal that the county has established.

"It's a ten percent deposit, the ninety percent remains unsecured- it's what we've come to call in our industry the 90 percent discount," said Michael Whitlock, Executive Vice President of American Surety Company.

Whitlock is in the bail bonds business.

He says using him is safer for the general public because when people skip out on him, he goes looking for them.

He says that's something the county doesn't have the resources to do.

In Saint Joseph County, the names of people who skip bond are handed over to the warrant division.

"It's about the same recovery rate, which provides really no incentive to really go to that. And they're just trying to suggest they do a better job of recovering people and they don't do any better of a job recovering people," said Dvorak.