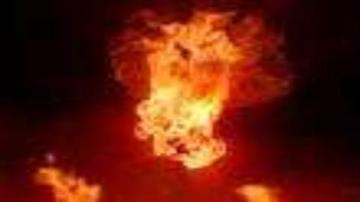 NILES, Mich. -- A Michigan couple came away unharmed after a fire broke out in their home. It happened just before 1 a.m. Monday on the 2400 block of Weaver Road in Niles.

Crews kept the fire contained to just one room of the house. They believe the fire started inside of the home's woodburner in the family den.

The homeowner says he tried to put the flames out with a fire extinguisher before crews arrived, but the blazes became too much to handle.

He, his wife and 2 dogs were all able to escape the home without any injuries.

The couple attributes their safe evacuation to the smoke alarm system they have set up throughout the entire house.

"Through the whole house, you could hear smoke alarms going off, said homeowner Chris Petruska. "I'm pretty convinced that if that wasn't the case, we wouldn't have gotten out of there."

Firefighters at the scene agreed with Petruska's opinion on the importance of smoke alarms.

"It's your first line of defense in case there's a fire in your house," says Bertrand Township Fire Chief Bill Knisely. "Carbon monoxide can build up and will put you further into sleep. So, it'll wake you up before it gets to that point."

It is not yet determined the amount of damage done to the home and it's contents. Petruska says he's certain that some of his irreplaceable family keepsakes were destroyed in the fire.

Investigators are still looking into the cause of the fire at this time.