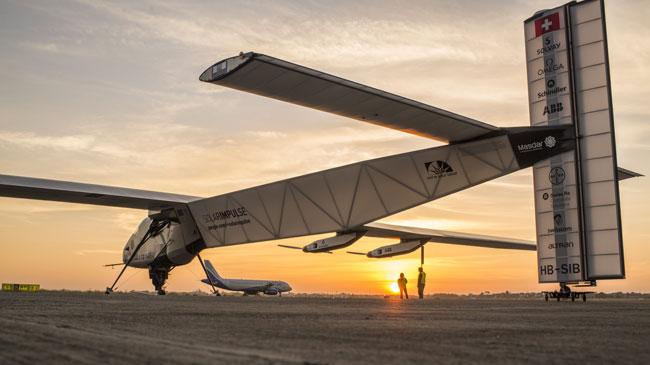 (CNN) -- Aviation history may be happening right over your head Thursday if you live in America's heartland.

Solar Impulse 2 -- a funky-looking, experimental, sun-powered plane that's attracted a lot of attention -- took off from a Phoenix airport toward Tulsa, Oklahoma.

Inside its tiny single-seat cockpit sits Bertrand Piccard, who's piloting the latest leg of the plane's attempt to be the first solar-powered flight around the world. He's expected to finish up in 18 hours -- arriving in Tulsa at about 11 p.m. local time.

For those who haven't been following this amazing journey, Piccard and fellow pilot Andre Borschberg have been flying what looks like a giant dragonfly. The plane's 236-foot (72-meter) wingspan is wider than a Boeing 747, but it flies about the speed of an average car.

The aircraft requires near-perfect conditions to fly. But what it doesn't need is any fossil fuel. Its four electric engines are powered by more than 17,000 solar cells built into its lightweight, super-strong carbon fiber wings.

In an age when adventurers seem to have few frontiers left to explore, Piccard and Borschberg have found theirs.

The big challenge facing the flight crew is crossing over the Rocky Mountains east of Albuquerque, New Mexico. The key: doing it at a time when the weather will treat the fragile plane with kid gloves.

Piccard's plan calls for him to ascend to about 24,000 feet (7,300 meters) early in the day before any clouds build up that could make trouble. If all goes well, Piccard will be able to fly either above the clouds -- or between them.

If Solar Impulse 2 can make it over that hump, mission planners say they expect a safe landing in Tulsa.

The mission is far from over, but it certainly has been a long journey to this point.

After taking off from Abu Dhabi in March 2015 and flying east, the team encountered a series of frustrating weather delays in China that slowed progress for weeks, followed by an unexpected diversion to Japan, where a storm damaged the aircraft on the tarmac.

Still, the pilots and their team of more than 100 pushed onward, repairing the aircraft and preparing for what they called "the moment of truth" -- the Pacific crossing to Hawaii.

For almost five days and nights, Borschberg piloted the plane wearing an oxygen mask as it climbed up 5 miles (8,000 meters) high during the day, its solar cells soaking up enough energy to propel the aircraft through the night.

While Borschberg set a new record for the solo flight, clocking in at 117 hours and 52 minutes, a chain of events caused the batteries to overheat.

It was only after he landed that the team discovered how bad the damage was.

"We made a mistake with our batteries," Piccard said after the plane touched down in July. "It was a human mistake."

That error took more than nine months to fix.

A few weeks ago, Solar Impulse 2 left Hawaii for San Francisco with new batteries and a new cooling system. The program also got $20 million in fresh funding.

From there, the aircraft flew to Phoenix.

After Tulsa and another stop in the United States, the Solar Impulse team hopes to cross the Atlantic Ocean.

The crew eventually plans to return to the Middle East by late summer, completing a 27,000-mile (43,000-kilometer) trip around the world.

CNN's David Molko and Euan McKirdy contributed to this report.