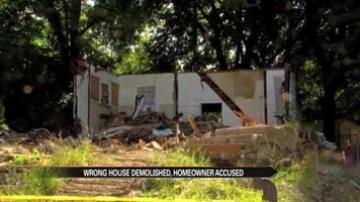 PONTIAC, Mich. --- Crews demolished the wrong house on Friday. The house next door was supposed to be demolished.

The man who owned the home is accused of changing the address numbers so he could save his home.

The homeowner whose house got demolished instead says he was planning on renting it out.

Now he is wondering if the city owes him a new house.

Nearby residents are saying good riddance to the torn down house. They say it was an eyesore.