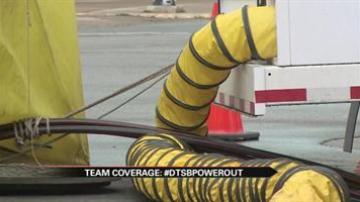 SOUTH BEND, Ind.-- Indiana Michigan Power expects electricity to be restored to downtown South Bend by noon on Sunday. Crews worked through the night replacing cable that was damaged during the fire on Thursday.

Tom Kratt said, “They’re all underground in these real small vaults with cables around them stripping the wire off to be able to bond the cables together."

The Vice President of Distribution for Indiana Michigan Power said they are investigating the cause of the fire after they get the lights back on.

"It caught several of the other cables on fire, so the system started tripping out and we had to shut the system down so it didn’t burn up the network.”

Kratt said crews are working around the clock and they are taking frequent air tests underground.

“We have to worry about carbon monoxide and other things in these enclosed spaces but our folks are down in these vaults all the time with energized cables.”

Kratt said they have about 35 workers alternating shifts.

“During Hurricane Sandy a year and a half ago, New York City had a lot of trouble because of the storm."

Kratt said he noticed salt corrosion on the cable they already pulled up.

“All the salt water that comes through in the winter, all the abuse it takes, the heat, all of that pours into the vault all the time.”

It will take 7 hours to test the system before power is restored.