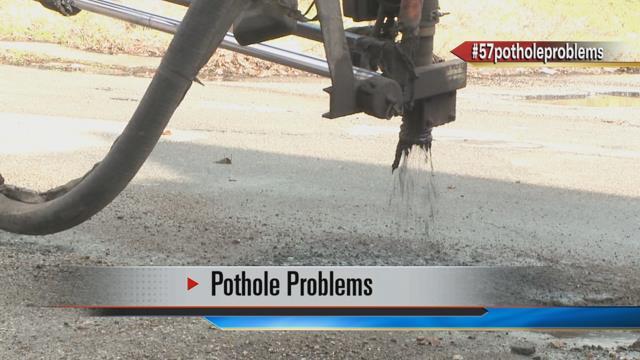 Potholes are all over St. Joseph County.

“We do try to stay on top of it,” Thomas Whitaker, supervisor for the South Bend Bureau of Streets said.

As winter fades away, the craters are still plentiful.

Even as temperatures rise, solutions are still limited, with most asphalt plants closed for another month.

For the temporary fix, South Bend has two trucks like this one for self contained cold mix, and four hot box trucks.

Compared to other cities, it’s an advantage because smaller towns in the county are way more limited.

An Osceola clerk had to put a special message on Facebook, asking residents to be patient with their potholes.

They say the smaller city has no pothole patching materials of their own.

They say it could be weeks until they purchase materials to start filling in the streets.

Then there’s the roads maintained by INDOT, like State Road 23.

It’s one of the worst pothole offenders that’s beyond temporary fixes.

The road will receive a resurfacing in April.

“Older roads are more at risk. Obviously newer roads were paved over the last couple of years are at a lot less of a risk,” Whitaker said.

In South Bend, patching is starting on main roads on the southwest quadrant.

“Slow down. Try to avoid them. We’ll get to them as quickly as we can,” Whitaker said.