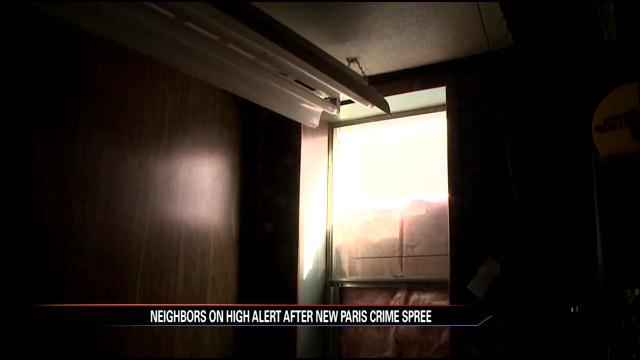 A crime spree in the area of New Paris in Elkhart has police searching for suspects. Police believe the break-ins happened late Sunday night or early Monday morning.

One neighbor believes his dog scared of the burglar.

Mark Vandamme said, “Their footprints were up by the door, they opened the screen door, the other door was locked so they were unable to gain entry and that's when the dogs came down the stairs and scared them away.”

Police said at least one home reported a burglary in the 19000 block of 4th Street by County Road 23.

Vandamme said he found his screen door open and footprints in the snow.

Vandamme said, “It's a husband and wife and they have 3 children that were sleeping upstairs and the burglars went in through the door downstairs.”

Vandamme said, “It is a little unnerving, I mean for people to come to houses when people are in them and break in to them, it's awfully scary.”

Police said several cars were broken into in the 68000 block of Main Street. A small-business owner on Market Street said someone threw a brick through his window as well.

Miller said, “They tried to get through this door, the outdoor screen door was open, so they did try to get in that way but I had this 2 x 4 up against the door so they couldn't get the door open!”

Miller has owned Miller's TV's in New Paris since 1982. He said this is the third time someone has broken into his repair shop. .

Miller said, “Somebody's inside your building and had no reason to do that. They were just out causin' trouble.”

Miller said it's bizarre because he couldn't find anything missing.

The Elkhart Sheriff's Department is asking the public for tips on this case.