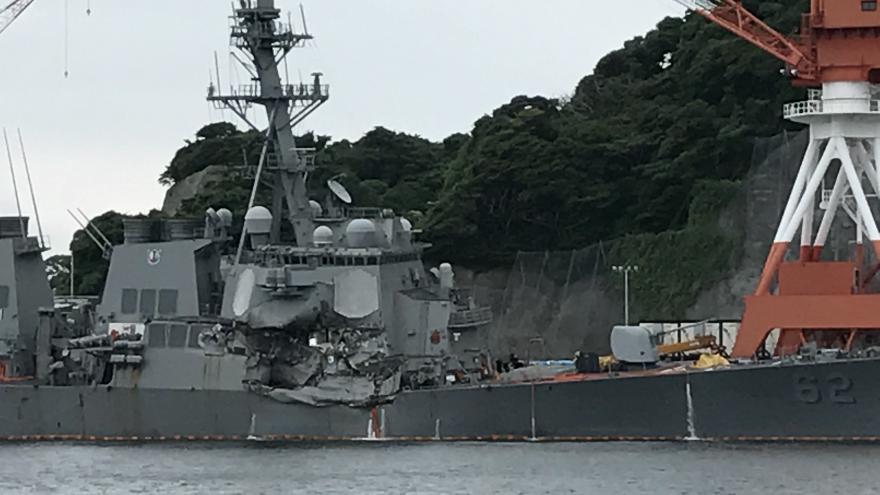 (CNN) -- The USS Fitzgerald, a Navy destroyer that was damaged in June after a deadly collision with a cargo ship off the coast of Japan, suffered two punctures to its hull on Sunday while being loaded onto a transport ship destined for the US, according to the service.

Already crippled as a result of the June 17 collision that killed seven US sailors, the Arleigh Burke-class guided missile destroyer was headed to Mississippi for repairs but was forced to return to its home port in Yokosuka, Japan, when it sustained additional damage in an incident involving a heavy lift transport vessel called the Transshelf.

"Fitzgerald returned to repair two punctures in her hull caused by the heavy lift vessel's steel support structure during on load at anchorage," the US Navy 7th Fleet said in a statement.

"Repairs are expected to extend the on load process by a few days, after which Transshelf will transport Fitzgerald to Huntington Ingalls Industries in Pascagoula, Mississippi, for further repairs and upgrades," the statement said.

The warship was towed to deep water last week to begin the loading process while en route back to the US for repairs after the collision earlier this year caused significant damage to its starboard side above and below the waterline.

While Sunday's incident is only expected to delay the Fitzgerald's trip back to the US by only a few days, the timing is less than ideal for the US Navy as the service continues to deal with the fallout of a recent spate of issues involving the 7th Fleet.

The accidents, off Japan and Singapore respectively, also left the Navy wondering how two of the most sophisticated ships on the seas couldn't even navigate crowded shipping lanes.

In total, the 7th Fleet has clocked up five major non-combat incidents in 2017 involving ships and an additional two involving aircraft, including last week's crash in the Philippine Sea of a plane taking personnel to the aircraft carrier USS Ronald Reagan.

A US Government Accountability Office report from September warned lengthy deployments of US ships based in Japan -- as both the Fitzgerald and McCain had been at the time of their collisions -- often result in key training requirements being neglected due to the demands of operational duties, something the report describes as a "problem."

Appearing before the House Armed Services Committee as part of an investigation into the series of fatal crashes and collisions at sea, the Navy's No. 2 officer, Vice Chief of Naval Operations Adm. William Moran, said the Navy is trying to do too much with too little.

"We continue to have a supply-and-demand problem which is placing a heavy strain on the force," said Moran.

The Navy has launched multiple investigations, a safety pause, and reviews in the wake of the recent accidents.

The service has also taken several personnel actions, including sacking the commanders of the Fitzgerald and the McCain, several other senior officers, as well as the commander of 7th Fleet, Vice Adm. Joseph Aucoin, the first time a fleet commander has been relieved of duty in the history of the US Navy.

The Navy's internal report on the Fitzgerald and McCain collisions, released in early November, said cutting corners to meet demands on 7th Fleet ships had become the norm.

"The risks that were taken in the Western Pacific accumulated over time, and did so insidiously," the report said. "The dynamic environment normalized to the point where individuals and groups of individuals could no longer recognize that the processes in place to identify and assess readiness were no longer working at the ship and headquarters level."