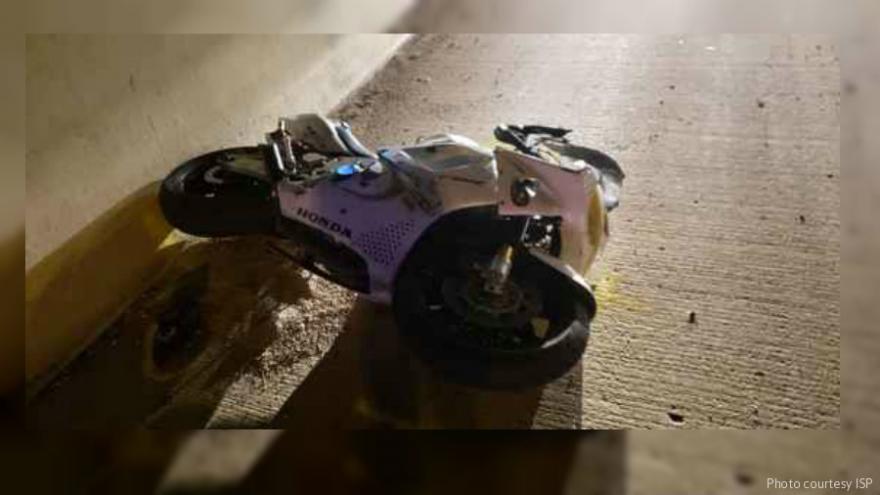 Hammond, Ind. – A Crown Point man died Saturday when he lost control of his motorcycle and crashed into a semi.

According to ISP at approximately 5:50 p.m., 29-year-old Michael Anco of Crown Point, Indiana was driving a 1995 Honda CBR900 northbound on Kennedy to the eastbound ramp of I-80/94 when he lost control of his motorcycle.

Authorities say, Anco failed to negotiate a curve on the ramp and crossed through the ‘gore area’ traveling into the right lane and striking a semi’s box trailer near the middle right side. The ‘gore area’ is defined by ISP as the marked area which separates the interstate mainline from the ramp.

Anco was run over by the rear tires of the semi's box trailer after he was ejected off the motorcycle, officials say.

After striking the trailer, the motorcycle slid to the right across two acceleration lanes and came to rest on the outer shoulder.

The semi came to rest slightly east of the motorcycle on the outer shoulder.

The 2015 Freightliner semi was pulling a box trailer loaded with refrigerated goods.

The semi was driven by 36-year-old Umbetov Arman of Panama City Beach, Florida and is owned by Global Transportation.

Anco was pronounced dead at the scene due to massive blunt force trauma by a deputy with the Lake County Coroner’s office.

Anco had been wearing a helmet and protective clothing at the time of the crash.

The semi driver, Arman, was uninjured.

The northbound Kennedy to I-80/94 eastbound ramp and both of the right lanes was closed for crash reconstruction.