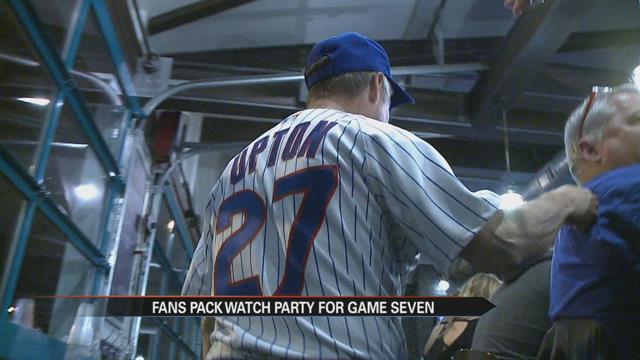 Now that the Chicago Cubs are World Series Champions, for fans, their post-season run has provided a much needed change of pace from this hectic election cycle.

“Nothing’s better than a Silver Beach Pizza, a schooner and the Cubs in the World Series. It doesn’t get much better than that,” said super fan Kathy Bublick.

For Cubs fans this post-season run has provided a welcome diversion from politics as usual.

“This is a wonderful distraction and I hope that everyone can come together when this is over and unite as one,” said Bublick.

With less than a week to go, Michigan Congressman Fred Upton, who hosted a Game 7 watch party at the pizza place, also agrees that this is exactly what the doctor ordered.

“This is great. I’m not going door to door. It’s a great magical story for the Midwest,” said Upton.

No matter the political background or beliefs, these Cubs fans all were voting ‘Yes’ for the same issue Wednesday.

And for one more night politics took a backseat to America’s pastime and a slice of pie.

“You are going be able to hear us in Chicago from here,” said Upton.