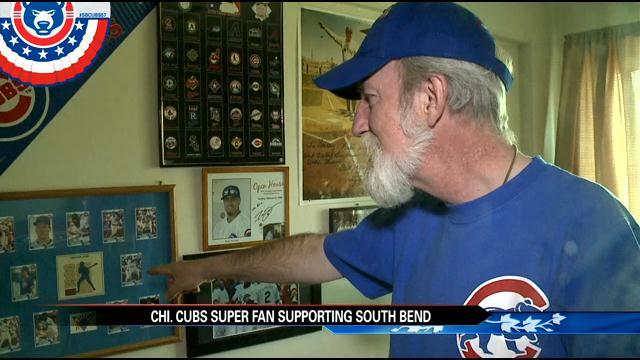 There are many fans looking forward to seeing the South Bend Cubs play at Four Winds Field.

But for one Mishawaka man, the build up for this moment has been years in the making.

Eric Larsen has loved the Cubs longer than a lot of people watching the game today have been alive.

And when he finally gets a chance to make it to a game at the stadium, that day will be added to his wall of memories.

“I don't think there would be any other team I would switch to, I'm not saying there are not good teams, these other teams, they are, but that's my team, the Cubs,” Larsen said.

For almost a half century, Larsen has been collecting baseball memorabilia.

Each item reminding him of his childhood and his love for the sport.

“As a boy you're excited, very excited," he said. "You can smell the popcorn and there's hotdogs, [hear] people talking and people yelling at the umpire which is a part of the game.”

For four decades the Cubs has been his dream team, and Wrigley Field a palace.

“When I first got there and walked up the steps and you see the field you're speechless,” he said.

Getting to Chicago is tougher these days.

So when Larsen learned South Bend was becoming an extension of that ball club, he could barely contain his excitement.

“When I heard about that, I jumped about two feet in the air," said Larsen. "I thought, ‘wow, something like this would never happen.'”

Larsen has over a hundred collectibles.

Many of them are gifts from family and friends.

Some of those trinkets are in mint condition and probably worth a lot of money.

But he says he won't sell any of it because his loyalty to the team is priceless.

And now he's looking to add to his collection with South Bend Cubs swag.