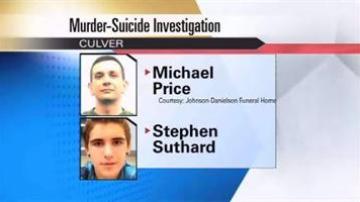 CULVER, Ind. -- Residents of Culver are desperate for answers about a murder suicide that happened last week. Police say 44-year-old Michael Price killed 16-year-old Stephen Suthard, then turned the gun on himself. Residents want to know why it happened.

Bean said even though the autopsy results are in, their investigation is far from over.

"I think our investigation won't be complete until we feel we found some more answers to some things,” said Bean.

Like what led up to the tragic ending last Wednesday.

"I know both of them, I work with Steve the father at the Corndance Cafe, he's the chef at our restaurant and Stephen has been coming in there after school for years,” said Debby Carlson.

“The Suthards have really been good friends of Mike’s for years and the kids went there for years. I've taken them there from the Corndance, the boys called him Uncle Mike,” said Carlson.

She confirmed there is no blood relation between the two families.

She says the day the shootings occurred, Suthards’ parents were having car trouble and asked Price to pick up Suthard from Culver High School - and he did.

But what caused Price to kill the teenager and then take his own life is unknown.

“It's already been a week and I think it was sad for the family to have to wait that long to find out in the first place, then not to know what they are dealing with the other way around. I mean they need to have an answer to why this happened,” said Carlson.

Lisa Mahler and her husband live next door to the house where the shootings occurred. She also told ABC 57 that police haven't interviewed her about what she may have seen or heard on the day of the shootings or the days before Nov. 28. She said she thought investigators would want to at least interview the neighbors about the seeing Michael Price throughout the day on Nov. 28.

Another women who did not want to be identify told ABC 57 that Price was seen near the local CVS store on the day of the shootings walking his dog around 6:30 p.m. However, she said the person who saw Price hasn't been interviewed either.

Carlson said Suthard was dismissed from school the day he was shot around 1 p.m., she said his Mother texted him several times throughout that day but was worried when he never returned any of the texts.

Carlson said both Price and Stephen Suthard Sr. used to work at a restaurant in Culver with her close to eight years ago. She said Price and Suthard knew each other before working together because Price was friends with Suthard's Father.

ABC 57 asked Chief Bean if his department is awaiting forenzic toxicology results for both Price and Suthard. He said they are however those results will likely never be made public.

Corndance where Stephen Suthard Sr. works as a chef is collecting donations that will go towards the funeral services for his son Stephen Suthard. Services will be held on Friday from 3 to 7 p.m. It is open to the public.