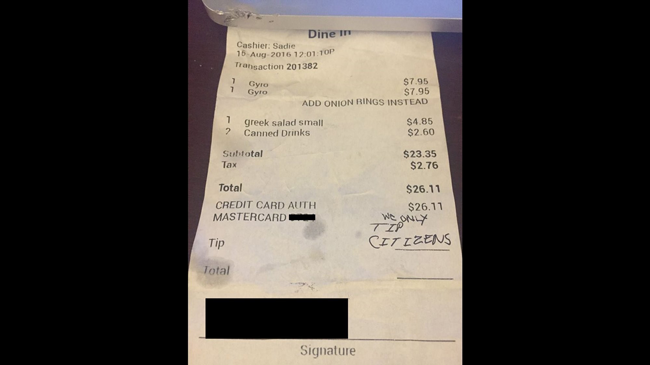 (CNN) -- A community in Virginia has rallied around a Latina waitress after she received a racist note in lieu of a tip last week.

"They wouldn't talk to me. They would just nod their heads," Elledge told CNN affilaite WHSV.

After she rang up the couple for two gyros, drinks and a Greek salad, they signed the receipt and quickly left the restaurant.

Elledge wasn't surprised that the couple didn't leave her a tip -- that happens sometimes. But the four words they'd written in its place shocked her:

"We only tip citizens."

'I was born here'

Elledge is of Honduran and Mexican descent, but she was born in the US.

"It doesn't really matter if I'm Hispanic or American, whatever you want to call it," she told WHSV. "I'm still a person, you should still treat me with respect."

Jess' Lunch is a popular spot for locals in Harrisonburg. Owner Angeliki Floros, an immigrant herself, has no patience for what happened.

"'Coward' is the word to describe what they did. I have worse words to use," Floros told the affiliate. "But let's go with 'coward.'"

Elledge said she'd serve the couple again but Floros said it won't happen on her watch.

The couple has been banned from eating there.

When locals heard what happened, a group of residents wrote a note to the waitress.

"We appreciate and value your hard work in taking care of the people in the community...you are the one who belongs in downtown," the Harrisonburg Downtown Renaissance letter said.

Included with the note: a tip. A substantial one.