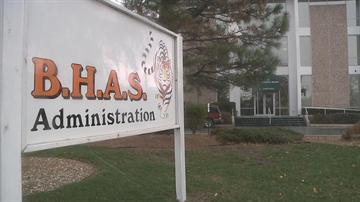 BENTON HARBOR, Mich. - Benton Harbor Area Schools have a daunting task ahead. The schools are $16 million in debt and need to climb out of that hole or get taken over by the state of Michigan. Massive cuts are looming over the schools and the superintendent wants to make cuts without impacting the quality of education.

Veronica and Johnny Ward have heard the rumors around town. "Every other week we're hearing about schools closing, teachers losing jobs, cutbacks here and there," said Veronica Ward. She and her husband own Master J's Hair Technicians, a salon in Benton Harbor. They know cuts need to happen at the schools.
The Ward's granddaughter is a sophomore at Benton Harbor High School. The Ward's want their grandchild to stay in the Benton Harbor Schools but they see so many other students switching school districts. "It’s just sad to see our kids in the city are going to the outskirts," said Veronica Ward.
School choice is eating away at enrollment and funding for Benton Harbor Schools. "Our district has been declining in enrollment for 25 or 30 years," said Dr Leonard Seawood. Seawood is the new superintendent at the district. He was hired 14 months ago and inherited the financial mess in Benton Harbor. Seawood says declining enrollment is just the tip of the iceberg.
Benton Harbor Schools have been in debt since 2006. "We're obligated by the state to continue to balance our budget and given that; we have some hard decisions to make." $16 million has to be made up in five years. $6 million was already cut for the 2011-2012 academic school year.
That means major cuts are coming.
According to Seawood, cuts could mean consolidating schools, selling property and cutting staff.
"When you look at our deficit we have to consider everything," said Seawood.
Seawood says it can all be done without cutting the quality of education if Benton Harbor follows through on a plan. "If we have the right budget in place, we have the resources to support the children of this district."
The Ward's have faith in Benton Harbor's future. "With (Seawood's) ideas, they're great but I think they brought him in a little too late," said Johnny Ward. He says they don't have much time to wait. Their grand daughter is looking for the best education possible to attend college.
Seawood is planning to hold several town hall meetings to talk about the cuts in the district.
Share this article: