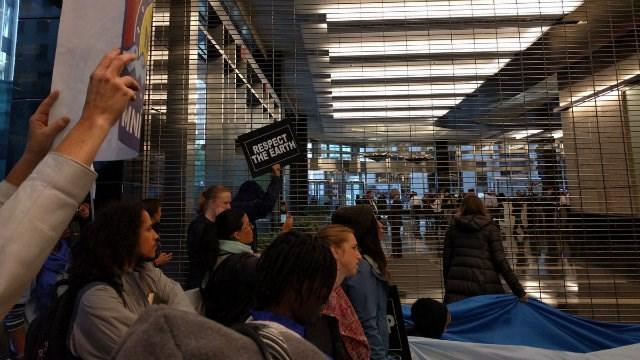 NEW YORK (CNN) -- Dozens of demonstrators aiming to raise awareness of the ongoing pipeline protest in North Dakota disrupted the morning commute at New York's Grand Central Terminal on Tuesday before marching on the offices of major US banks to question their decision to fund the pipeline.

The protesters, who oppose the Dakota Access Pipeline, gathered in the station's lobby floor at 8 a.m. to express solidarity with the demonstrations at Standing Rock Sioux Reservation in North Dakota, they said. They then marched from Grand Central to the offices of Bank of America and JP Morgan to protest the big banks' funding of the project.

Some chanted, "It is always a political fight." Others waved signs that read, "Water is life" and, "Respect the Earth." One large banner read, "Indigenous sovereignty protects the land and water."

Lorena Ambrosio, a demonstrator originally from Peru, said she came to spread the word about protecting indigenous people. "Our people at Standing Rock are being terrorized by military and police," she said. "They are being pepper sprayed, shot with rubber bullets, arrested and beaten. We will not stand for this."

Lori Dalvi, from South Orange, New Jersey, said she has been participating in the protests since earlier this summer, raising awareness about the protests through Facebook and Twitter. "This issue is a tipping point issue for all of us," she said. "If we do not change the way we are treating this Earth to receive our fuel and energy sources, we are in deep trouble."

Protesters have been gathered in Standing Rock, North Dakota, since the Sioux tribe filed for a temporary restraining order in early September "to prevent further destruction of the tribe's sacred sites by Dakota Access Pipeline."

The 1,172-mile proposed pipeline would stretch across four states -- North Dakota, South Dakota, Iowa and Illinois. The project would cost $3.7 billion and aims to make the country more self-sufficient, but could prove to be an environmental disaster that destroys Native American sites, should it ever malfunction. The pipeline would carry 470,000 barrels of crude oil a day en route from North Dakota to Illinois.