It's so cold, wet clothing will freeze solid in under 10 minutes 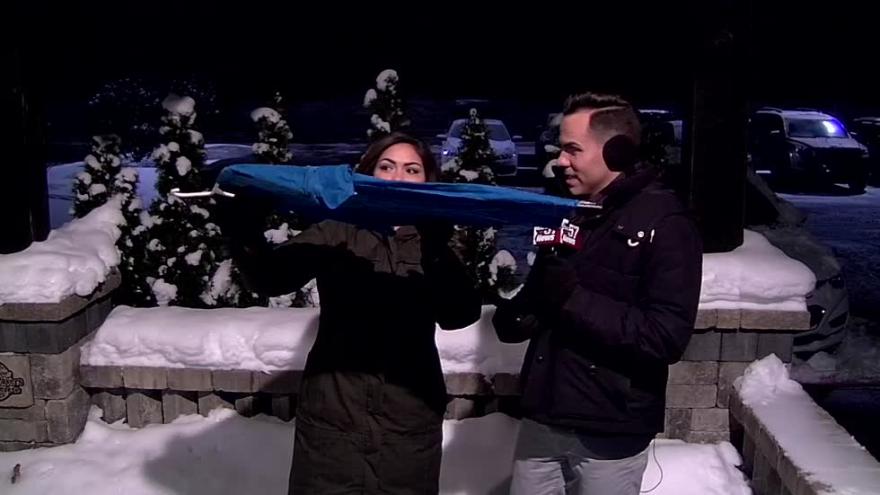 With these dangerously low temperatures recorded across the country, folks are taking advantage of science experiments.

Videos like this one have gone viral due to the temperatures and a little curiosity.

It's so cold today in New York, a little girl's bubble freezes right on her bubble wand! https://t.co/Bmb5usPUCTpic.twitter.com/VOJWq20Oyv

The ABC57 Morning Team decided to conduct some experiments of our own.

Soap bubbles are simple. When air is forced into a soap-water mixture, it becomes trapped inside a soap film layer of molecules. When the bubble comes in contact with air 32 degrees Fahrenheit or below, the mixture will be begin to freeze and crystallize. During our experiment, the bubble only lasted for approximately 12 seconds before it was frozen over.

Here's how you do it:

Maybe you've seen this internet trend. Boiling hot water is thrown into air at a freezing temperature and snow is produced. This is made possible because hot water freezes faster than cold water during a process called "Mpemba." This experiment has an exciting visual as the water rapidly freezes, but if the water doesn't freeze all of the way, you could be burned.

This experiment will show you why it important to stay as dry as possible during times with dangerously low temperatures. The water soaks the T-shirt and once it is put in temperatures below the freezing mark, the moisture in the fabric begins to freeze and the clothing becomes stiff with ice. Hypothermia could result from frozen clothing. Our shirt only took eight minutes to freeze at a temperature of -12 degrees.

This is how to do it:

The National Weather Service says being exposed to dangerously cold temperatures for too long can result in hypothermia or frostbite.